An update on the River Frome fish kill

This is what we all live in fear of!

It is a crying shame for the many people in Frome who love their river and especially for groups like Frome Angling Club and Friends of the River Frome who do such a lot in the area to look after the river.

The enthusiasm generated by the brilliant work of the The Wild Trout Trust and others on the project just completed in the town which was funded by the Environment Agency in particular to support fisheries has been well and truly blunted.

BART have been trying to get some priority given to the Somerset Frome for some time now to try and help identify where the river is at risk and hopefully reduce those risks. Sometimes these problems can be prevented but farmers and the environment both need help to do so. We will continue to do so.

Just remember this could very easily happen on your river – there is less and less money around to prevent it and protecting rivers from such events just does not have the priority it really needs.

Thanks to everyone who has made us aware of this issue. An Environment Agency update on the kill below: 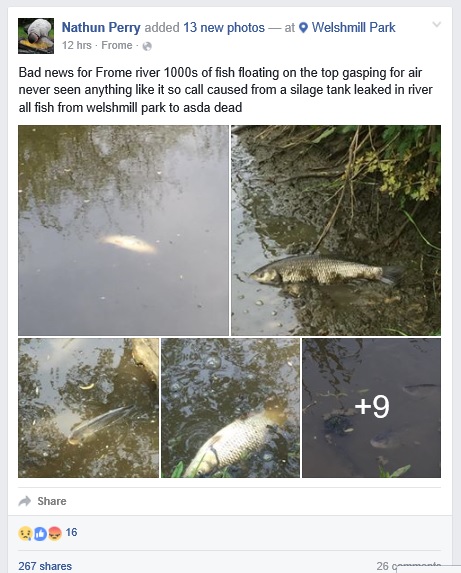 ‘The Environment Agency was notified of a large fish kill on the River Frome in Frome town centre, Somerset, on Thursday 12 May 2016.

We have received a total of 14 reports from members of public reporting this pollution since early afternoon on Thursday 12 May 2016.

Environment Agency officers attended the River Frome on Thursday evening to investigate this pollution and assess the number of fish deaths.

Due to the high concentrations of ammonia in the river and low oxygen levels, a large number of fish were in distress or dying. Our Operations Delivery team deployed hydrogen peroxide to the river on Thursday evening to help restore levels of dissolved oxygen.

By morning on Friday 13 May the oxygen levels in the river had increased to 42% and ammonia levels had greatly reduced. It seemed that the worst of the pollution had now passed.

Further investigation was undertaken on Friday 13 May by Environment Management officers, during which time the source of the pollution was discovered. It appears that slurry had been released from a farm.

The pollution is being treated as a Category 1 incident (the most serious) due to the number of fish killed and impact on the environment. We are currently collating all of the evidence gathered by Environment Agency officers. This will be used to decide our enforcement response.