We have recently had a number of emails and messages on social media from people who are unsure of the laws surrounding catching and handling American Signal crayfish, so we thought it would be beneficial to put up a post to explain. 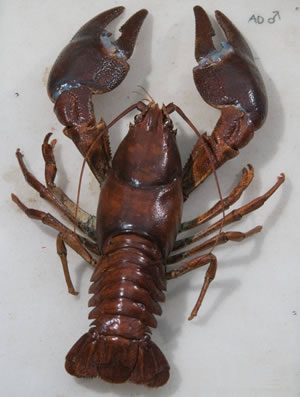 The American Signal crayfish, as the name suggests, originates from North America. It was bought over to Europe in the 1970s and bred on farms for the restaurant trade. The crayfish escaped and now has well established populations all over the country,  particularly in the south. As well as being a voracious predator of plants, invertebrates, snails, small fish and fish eggs, the Signal crayfish carries the crayfish plague to which our native White-clawed crayfish is susceptible. Burrowing into the riverbank by the Signal crayfish can also cause bank erosion, as they create many inter-connecting tunnels that weaken the bank. This contributes to problems during flooding, livestock safety and stability of bankside structures.

Signal crayfish grow faster, reproduce at a faster rate, are more aggressive and are tolerant of a wider range of conditions than the White-clawed crayfish, and therefore out-compete the native species, which is now endangered.

It is illegal to trap and catch Signal crayfish without a license from the Environment Agency. Unfortunately, the native and American crayfish are extremely difficult to tell apart so where it is thought that native species are present, it is unlikely that a license will be granted for trapping. For more information and guidance on how to apply for a license by clicking this link.

As with many invasive species in our waterways, controlling and eliminating Signal Crayfish is so easy task. The best method is to prevent their spread in the first place, by making sure to Check, Clean and Dry all clothing and equipment when moving between different watercourses.

Trapping Signal Crayfish is not considered a viable option to reduce numbers, as this method is often selective to larger individuals.  These larger individuals reduce numbers of juvenile Signal Crayfish by out-competing them for prey and habitat and therefore by removing them, this allows juveniles to thrive and therefore populations to increase.

For more information on invasive species along the Bristol Avon Catchment, do get in touch with ourselves or our friends at the Avon Invasive Weeds Forum.

A note to our riverfly volunteers
January 13, 2022

Finding Pharmaceuticals in our Rivers
November 25, 2021

Nature Based Solutions on the Candlestick Stream
November 24, 2021