Bringing back curves to the River Biss

September is always a busy month for BART with fieldwork and river restoration, and this year was no exception. As we need to avoid the trout spawning season which begins in October, September is always jam packed with long days out on the river and we have definitely been making the most of it!

Over the weekend BART have been doing river restoration with the Friends of Biss Meadows Country Park in Trowbridge. They are a community conservation group formed of dedicated volunteers who protect the plants and wildlife at the country park. They also run wildlife walks throughout the year and have monthly working parties so are kept busy all year round!

Working together with the Friends group and other volunteers we restored in-stream habitat diversity to a section of the River Biss, which created a more diverse flow within the river channel which had  previously been overwidened and overstraightened. The berms which the volunteers built will create new areas of habitat by forming shallower bays which will gather sediment and form new areas of bankside, as well as faster flowing sections of the channel which creates flow variety. 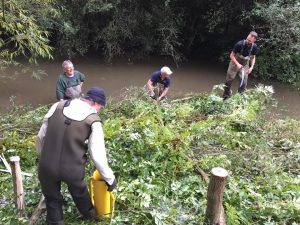 The team built woody debris structures out of coppiced tree limbs which are then fixed into place by the bank using chestnut stakes. The tree limbs are angled into the channel and brash cut from the tree limb fills in the structure from the bankside. 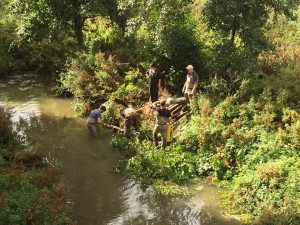 These structures will provide refuges for juvenile fish as the river slows as it flows through it, and acts as a nutrient trap where the water is warmer which again gives juvenile fish a helping hand in finding food. The structures also trap silt which would otherwise be suspended in the channel, and promote scouring of silt from gravels on the riverbed which is essential for fish spawning. 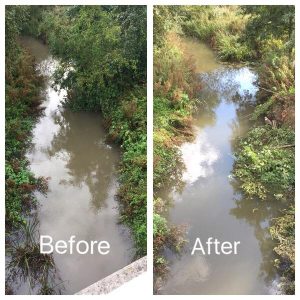 The conditions were pretty tricky to work in with deep water full of silt after the recent heavy rain, so an extra well done and thanks to all the volunteers and the Friends of Biss Meadows!

Thanks to People’s Postcode Lottery‘s Awards for All for funding this project with Friends of Biss Meadows Country Park.

Citizen Science at the Land Yeo WaterBlitz
May 18, 2021

Assessing the status of the Little Avon headwaters
March 3, 2021
Go to Top