Celebrating #WorldWetlandsDay for the eel

This #WorldWetlandsDay, some of the BART Team will be spending the day at Steart Marshes in Somerset continuing a vitally important project to monitor population levels of the European eel in this important wetland. This 2 week project, led by Westcountry Rivers Trust and funded by the Environment Agency, will assess how the eel use the Steart as important feeding zones, life habitats or as part of their migratory route.

Opened in 2014, Steart Marshes is managed by the Wildfowl and Wetland Trust and the Environment Agency and has been labelled as ‘a wild, wetland landscape for the future that helps people and wildlife adapt to climate change.’ Rising sea levels are predicted to completely flood thousands of hectares of saltmarsh and mudflats over the next 50 years. At some places, such as Steart Marshes, it is possible to realign the coastline, allowing vital new saltmarsh to form. As with all wetlands, the area provides habitat for a rich mix of wetland wildlife including otters, egrets, owls waders and wildfowl and its creeks are a nursery for the fry of important fish stocks. Not only this, but the habitat is a vital carbon storage area, absorbing tonnes of climate-polluting carbon as it matures.

We will update on the success of the project as it unfolds but we are pleased to have found the first evidence of eels using 2 different habitats within the site so far. We were joined in these findings by a familiar face from TV – Hugh Fearnley-Whittingstall, who came to learn more about Westcountry Rivers Trusts and BART’s conservation and research efforts. We look forward to seeing the plight of the eel on our screens in 2018 as part of Hugh’s new series exploring the Westcountry! 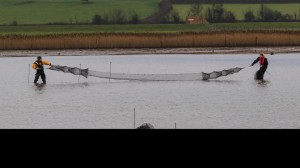 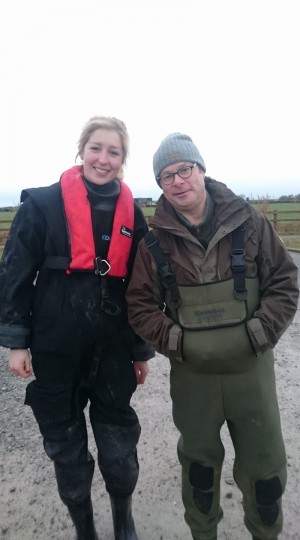 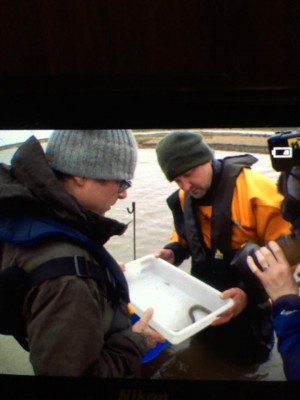 We got one! Hugh and Scott from Westcountry Rivers Trust admire a yellow eel found at Steart.

Yellow Fish in the Bristol Frome
Go to Top
Manage Cookie Consent
We use cookies to optimise our website and to improve our service.
Manage options Manage services Manage vendors Read more about these purposes
View preferences
{title} {title} {title}