Eel in the Classroom – the big release!

Over 100 pupils from 6 different primary schools across Wiltshire, Bristol and Somerset have been out and about in local rivers releasing over 600 young European Eels which they have been studying as part of our Eel in the Classroom project. Each primary school looked after approximately 100 elvers (young eels) for 5 weeks, during which time they learnt all about eel life cycles, the river habitat and threats to eel survival.

The eels were donated by UK Glass Eels after being caught by elver fisherman on the River Severn, after which approximately 100 eels were given to each primary school. After 5 weeks of feeding the eels every day, learning about their life history, and in some cases even naming the eels, it was time to release them back into rivers to begin the next stage of their lives. The eels spend up to approximately 20 years in the headwaters of rivers, in small tributaries, ditches and streams before they make the epic 5000km migration back to where they were born in the Sargasso Sea to spawn. 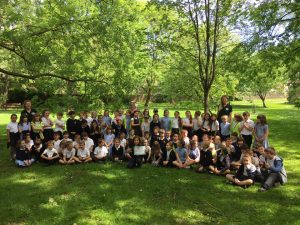 Primary school pupils enjoying the sunshine after the eel release 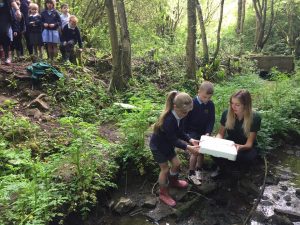 Helping to carefully put the eels back into the river

The children thorougly enjoyed having the eels, and said that some of their favourite things about them were “naming them and trying to remember which one was which”. The children from each school got to help release the eels back into the river, and all recived a certificate and trophy for their hard work. All the schools were very interested in having more eels next year, and even the teachers said they would miss seeing the eels every day and saying hello to them in the morning! 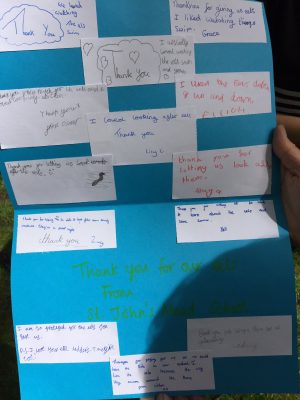 Eel in the Classroom is an incredibly important project, both in terms of the experience the children get as well as the European Eel conservation work it delivers. European Eels are critically endangered, their long and complicated life cycle means that only a very small percentage of them survive to adulthood. They are an important part of our river ecosystem but with so many barriers to their survival, mainly from human influences, they are now at risk of extinction. The human stresses upon eel survival include climate change, overfishing, pollution, habitat loss and barriers to their migration caused by weirs and dams. However, the Eel in the Classroom project gives the elvers a head start in life and we hope that some of them will survive to adulthood. We asked the children to be on the lookout for migrating eels in about 10 years time! 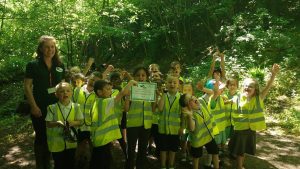 Our Project Officer Claire at one of the eel releases in Badocks Wood, Southmead

Not only does Eel in the Classroom benefit eel conservation in terms of improving eel survival, but also in terms of understanding and awareness through education. This is a cross-curricular programme, which can be woven into numerous different subjects in school. From the Science and Biology side where children learn about eel life cycles, they can also learn about the area of the world the eels have come from in Geography , the extent of their migration and how humans are affecting their survival. In English the children wrote poems about eels, and even read them to the eels too. There is also a great deal to learn about eels in History lessons, as in the past eels were a very popular food in this country, and in Roman times some people even kept eels as pets! In Maths children can learn probability to calculate what proportion of their eels are likely to survive, and one of the schools was inspired by the river habitat of the eel and made this beautiful display in Art lessons. 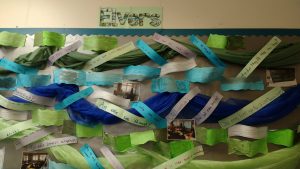 A beautiful and creative river-inspired display

Through the environmental education delivered in this project the children have become much more aware of the wider world and how humans are having a detrimental impact upon it, which directly impacts the wildlife we find in our local areas. For far too many children outdoor play, especially in or near rivers, has become a thing of the past. In today’s urban society filled with technology many children do not spend time outdoors getting to know common wildife species and enjoying seeing them in their natural habitats. By bringing wildlife into the classroom we hope that this will inspire the conservationists of the future, making children and their teachers, parents, friends and families more aware of the direct influence we are having on wildlife, and reconnecting them with nature.

Thank you to Bristol Water for funding the eels and equipment, and to the Sustainable Eel Group and UK Glass Eels for their support. Here’s to Eel in the Classroom 2018!