Electrofishing surveys on the Wellow Brook

Thanks to funding from the Bristol Avon Catchment Partnership, BART carried out electrofishing surveys on the Wellow Brook this summer.  The study was undertaken to provide part of a set of data being collected to monitor improvements made by the boulder weir removal (read more about this here) and also a number of in stream habitat improvements made following funding from the Environment Agency.

On 6th and 7th June 2017, BART worked with Five Rivers Environmental Contracting to conduct electrofishing surveys on the Wellow Brook between Stoney Littleton and Wellow.  Electrofishing is a fish surveying technique combining a mixture of electrical current with a known water conductivity to temporarily stun fish in order to measure and document the population and community fish statistics at a freshwater location.

The following fish were found during the survey:  Brown trout, European eel, Brook lamprey, Stone loach, Common bullhead, Minnow, 3 spined stickleback and 9 spined stickleback.  During the surveys, most fish were found at pinch points where both fish cover and flows increased significantly compared to otherwise straightened and canalised sections.  Recommendations were made to increase pinch points in these straightened sections of the river and introduce woody debris.  The findings of the electrofishing study were used to inform the river restoration works carried out by BART on the Wellow brook in September and October 2017. Read about the river restoration work to improve fish habitat here! 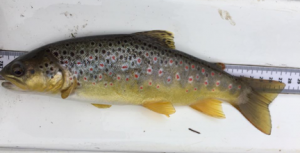