This BART worked with Five Rivers Environmental Contractors carrying out electrofishing surveys along the Midford Brook and Wellow Brook near to Bath. 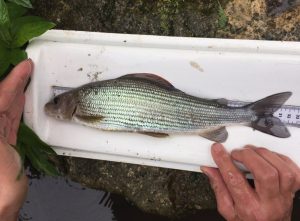 Grayling, one of the finds from the survey

These surveys were conducted at a number of sites to collect valuable data and increase our fisheries knowledge in the Catchment for a variety of reasons. Firstly, as pre-project monitoring, to determine species presence before beginning habitat improvement works such as installing woody debris structures. Secondly, for post-project monitoring after the removal of three weirs in the Midford Brook. Thirdly, the surveys were to determine the presence of grayling which had not been determined in previous surveys. 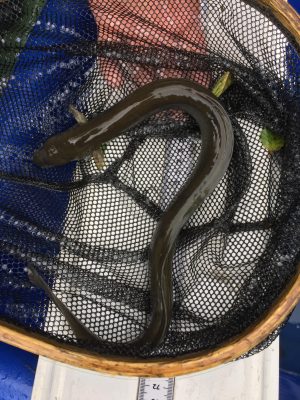 A number of eels were found during the surveys

The surveys also trialed an exciting new technique called eDNA which analyses samples of water for DNA to test for the presence of different fish species. Whilst this technique has been going on for some time in ponds, this is a trial for rivers so we look forward to seeing the results!

Minnows in their beautiful spawning colours

Yellow Fish in the Bristol Frome
Go to Top
Manage Cookie Consent
We use cookies to optimise our website and to improve our service.
Manage options Manage services Manage vendors Read more about these purposes
View preferences
{title} {title} {title}