In 2017, Bristol Avon Rivers Trust (BART) applied to the Environment Agency’s ‘Fisheries Improvement Fund’ following a walkover survey of the entire length of the river and several small improvement projects over recent years.

The River Marden rises in Calstone Wellington, Wiltshire and runs through the town of Calne, then
through pasture and villages before joining the Bristol Avon to the north east of Chippenham. Water
Framework Directive (WFD) status along the river varies between Good and Moderate (in the lower
catchment). The river has a number of issues along its length that are resulting in the degradation of
both water quality and fisheries habitat. These include river impoundment and fish passage
restrictions by weirs, as well as the historic straightening of large sections of river.

The objective of this project was to contribute to addressing some the main issues affecting the river.

The River Marden is predominantly a coarse fishery (notably roach, dace, chub, perch, pike, bream,
barbel, bleak and gudgeon) though wild brown trout are found in large numbers throughout the
river. There are a number of obstructions along the river which impact on the movement of fish and
also the quality of habitat upstream of the obstruction i.e. the creation of a silted bed substrate and
impounded flow conditions.

BART identified three weirs; Moses Weir, Stanley Weir and an unnamed bedrock weir where fish passage and, if feasible, upstream riverine habitat improvements following the weir removals, would gain significant benefits for the river. Hydro-Morph Ltd was commissioned by BART to undertake an initial site visit and pre-feasibility investigation of possible options for improving fish passage and upstream habitat at each structure. These reports have been completed and provided to the Environment Agency Fisheries and Biodiversity team.

This element of the project worked on an overshaded and straightened section of the river
downstream of Chilvester Hill, Calne. Low cost improvements were delivered here including coppicing to re-instate a 60:40 ratio of shade to light. In-stream wooden flow deflectors were
constructed from bankside materials to help re-meander the river within it’s straightened banks.

In total BART constructed 11 structures, which will have a variety of benefits including increased
flow diversity, cleaner spawning gravels and providing enhanced fish cover for fry and adult fish. We
are looking forward to seeing how these structures develop as similar structures we have built on
the river in Calne have been very well received and had an almost immediate impact on the river
and the sport provided. The Marden is a relatively spatey river so we anticipate that the structures
will be well hidden by silt accumulation in a year and will form part of a newly meandering bankside
within 2-3 years. We will continue to monitor the progress of these structures as this occurs. 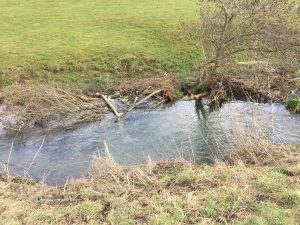 Figure 1. A ‘pinch point’ created with a wooden berm which will encourage flows to scour the gravels, flushing out silt and improving fish spawning potential. 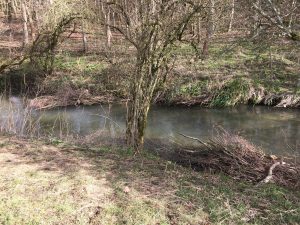 Figure 2. Alternate berms constructed to re-form a meander within the banks of this straightened section.

BART’s survey work on the Marden identified two boulder weirs immediately above the confluence
of the river with the Bristol Avon at Chippenham. The weirs presented a barrier for smaller, weak
swimming species as they were only passable in high flow conditions. The lower sections of the
Marden have important spawning gravels and increasing access to these will help gravel spawning
species increase recruitment. The lower Marden also acts as an important refuge when the main
river is in spate. The weirs were also contributing to silt build up in the stretch of river above them
which was having an adverse effect on fish spawning as the riverbed gravels had become smothered
in sediment.

The two boulder weirs were removed as part of this project and the once uniform deeper section of
river with slow flows, is now shallower with riffles, exposed gravel bars and less silt deposition
creating new potential spawning grounds. BART will now leave the stretch to adjust to the new
conditions for a year before reassessing whether there is a need for any follow up habitat work.

Figure 3. Before and after – removal of one of the boulder weirs.

Thanks to all of our fantastic volunteers for their help with this project, to the landowner, land agent and tenant farmer for their help and enthusiasm and of course to the Environment Agency for funding these works. A huge thank you also to Wroughton Angling Club and Calne Angling Club, without whom this project would not be possible. We are looking forward to continuing to improve the Marden!