BART have completed a very interesting and useful project funded by the Bristol Avon Catchment Partnership this Spring.

Sediment entering watercourses can have a detrimental effect on aquatic ecology, including fish and invertebrates.  This project has used predominantly field surveys to identify where sediment is entering watercourses in the upper Somerset Frome catchment and to determine the sources of this sediment.

The survey period of the project drew to a close at the end of March, with over 191 locations visited on the upper Somerset Frome looking for potential sediment pathways. Sediment pathways have been recorded at over 110 locations on the main river Frome and its tributaries including Redford Water, the Rodden Brook and the Marston Brook. At each location the source of the sediment pathway has been determined where possible and a diffuse pollution grade has been allocated to identify the severity of the pollution pathway.  Photo 1 shows an example of sediment entering the Rodden brook via a pipe during a wet weather event. 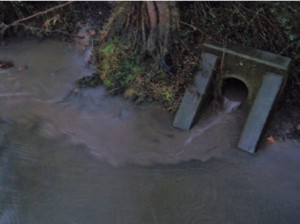 1. Pipe discharging into the Rodden Brook

The most common, and sometimes very severe pollution pathways seen as part of this project have included poaching and trampling by cattle and horses (photo 2), muddy farm tracks, gateways and yards, maize grown to the edge of watercourses with very little buffer zone (photo 3), discharging pipes and road run off. The most severe pollution pathways have been re-visited during or shortly after heavy rain to collect further evidence. 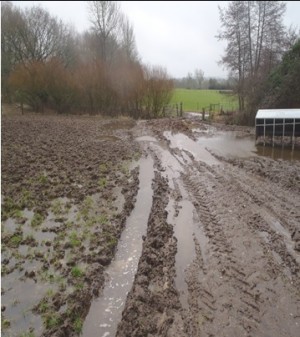 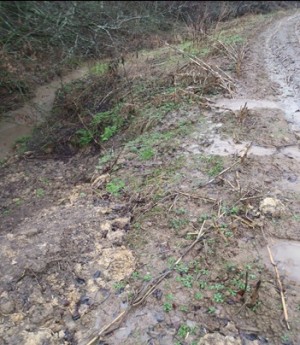 3. Lack of buffer alongside a maize field resulting in run-off into the Rodden Brook

Alongside the field surveys the Somerset Frome project included a public engagement campaign to increase local awareness of the issues surrounding erosion risk and diffuse pollution and to build stronger relationships with the landowners surrounding the river Frome. As part of this work a farmers’ lunch was held on 9th March 2017 in the upper Frome area. This lunch brought together local farmers, BART and Farming and Wildlife Advisory Group (FWAG) to discuss sediment pathway issues in the catchment and to encourage partnership work in the future.

Thank you to all interested individuals and organisations who have been involved in the project and sent in information to help us prioritise areas to visit.

The report is now available to view but is too large to host on the website. If you would like a copy then please email our Project Officer Harriet at harriet@bristolavonriverstrust.org

We are really keen to continue work with the very helpful landowners in this area and to help take the actions necessary to remove some of the problems we spotted. Many are potentially small and low cost but would add up to a significant decrease in sediment entering the river if they are fixed. We are currently seeking funding to make this happen. ​