You are here:
EducationLatest News 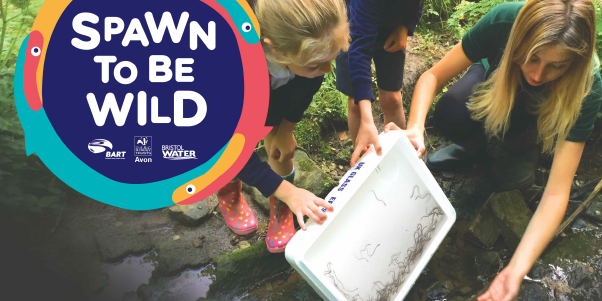 BART are delighted to announce that we have bought eels to 11 classrooms along the Bristol Avon for the fourth year running!

The ‘Spawn to be Wild’ project is an innovative education project between Bristol Avon Rivers Trust, Avon Wildlife Trust & Bristol Water that seeks to engage pupils with the wildlife in their local river by bringing the wildlife to their classroom, in the form of the critically endangered European eel, Anguilla anguilla. Suffering declines as great as 97% since the 1970s and more endangered than the red panda, the eel has a fascinating lifecycle that is hugely affected by our everyday lifes. Their preference for moving around at night means that they often go unobserved in our rivers, until now…

The European eel is thought to spawn in the Sargasso Sea in the North Atlantic Ocean, before floating in their larval form on ocean currents towards Europe. Once they reach the freshwater estuaries around the coast, they morph into ‘elvers’ and swim up into rivers where they spend up to 20 years living and feeding. Once they have grown and matured, they swim back to the Sargasso Sea where they lay their eggs. Their decline in numbers of up to 97% is due to numerous factors, all of which are thought to be human induced. Structures including weirs, tidal gates and dams all act as barriers to migration as the eels swim up-river, and pollution, climate change, overfishing and habitat loss all have a negative impact on eel survival.

Approximately 50 elvers, caught by elver fisherman on the River Severn and purchased from UK Glass Eels, have been taken into each primary school. The children were incredibly excited to get their elvers and they all came armed with a huge number of questions which kept BART on their toes! See some from St Andrews below…

After 4 weeks of feeding the eels every day, learning about their life history, and their threats to survival, the schools will release them back into their nearest river to begin the next stage of their lives. The eels can spend up to around 60 years in the headwaters of rivers, in small tributaries, ditches and streams before they make the epic 5000km migration back to where they were born in the Sargasso Sea to spawn. BART also run a series of extra lessons throughout the project including river dipping (getting the children in their river, often for the first time), water pollution and food webs.

The project is taking place with the following schools this year:

Thanks to our wonderful funders Bristol Water, Avon Frome Partnership and A Forgotten Landscape, there are lots of very excited children waiting for the elvers to enter schools in the next couple of weeks! We look forward to sharing the progress of our elvers.

Please feel free to get in touch if your school is interested in taking part next year.