So here we are in September, our busiest month of the year for in-stream habitat improvement works and it feels like just yesterday we were finishing up our works on the Bristol Frome at the end of February. How quickly has that Summer (or lack of it!) flown by!? We conduct most of our in-stream habitat work, which largely involves adding woody materials to rivers, before October to avoid the trout spawning season (October to March), where any disturbance of sediment may affect egg survival. By avoiding this season, we can be sure that our habitat work only has positive impacts on juvenile fish recruitment. This is different for coarse rivers whose ‘closed season’ is 15th March to 15th June inclusive.

We are extremely lucky to have received funding from multiple funders (HDH Wills, People’s Postcode Trust, the Bristol Avon Catchment Partnership and the Environment Agency) to deliver habitat improvement works along a significant length of the Wellow Brook over 5 weeks. These improvements are taking place around the areas of Midsomer Norton, Stoney Littleton and Wellow. 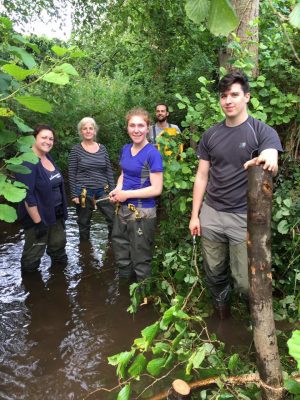 Volunteers at work installing woody debris in the Wellow Brook

This woody debris work is happening for a variety of reasons along the brook, including any previous modifications to the channel (such as straightening, overwidening and artificial banksides), low fish numbers (as deduced from Environment Agency and BART electrofishing surveys) and as a follow on to our removal of 3 boulder weirs at the end of 2016. However, the general benefits are similar wherever these structures are placed and include: 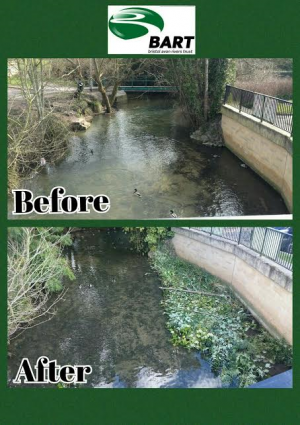 An example of woody debris habitat creation from last years work on the River Marden, Calne.

These works simply replicate the processes and benefits that occur when a tree falls into the river, but in a way that ensures no unwanted erosion or enhanced flood risk. Over time, silt in the river will accumulate on the structures, they will vegetate and they will form part of the bankside in a more natural, meandering form than before the works. This method is much better than hard engineering works using man-made materials as it creates more diverse habitat, is more natural, requires less carbon dioxide to produce, is cheaper and provides an extra win of coppicing overshaded rivers.

We are also pleased to announce that we have been selected to go forward to the Tesco Bags of Help public vote, where Tesco customers around the Bath area will have the chance to vote to extend these improvements to the urban section of the Wellow Brook through Radstock. This will provide a crucial link to join up our habitat improvement works, which will result in further enhanced fish populations. More information here.

These works are part of our larger Wellow and Cam initiative which is taking a catchment approach to improving the length of the Wellow and Cam Brooks. Other upcoming elements to this initiative include fish passage investigations later in the year, landowner meetings and farmers lunches to discuss how we can work together to reduce diffuse pollution levels in the area.

We are very grateful to those people who have already volunteered with us on this project and those of you who have signed up to volunteer over the next 5 weeks. A massive thank you is also due to our funders HDH Wills, People’s Postcode Trust, the Bristol Avon Catchment Partnership and the Environment Agency for funding these works!