Assessing the status of the Little Avon headwaters 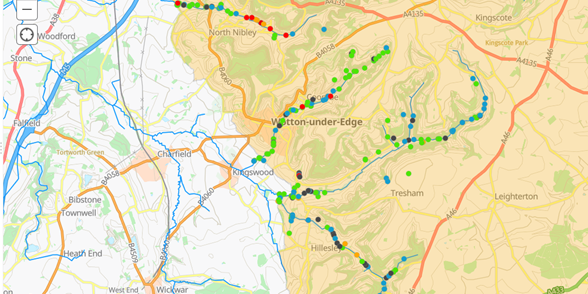 BART is working in partnership with the Cotswolds Champions Programme from the Cotswolds National Landscape to assess the condition of the Little Avon headwaters which rise within the Cotswold AONB. Four Little Avon tributaries were identified and surveyed within the project area: the Doverte Brook, Dyers Brook, Ozleworth Brook and Kilcott Brook.

The Little Avon River rises from Cotswold springs upstream of Wickwar in Gloucestershire. The river then flows northwest for approximately 15km passing near to the settlements of Charfield, Stone and Berkeley before entering the tidal River Severn. The local geology is that of friable sandstone and clay with the source water provided from the limestone mass on the western edge of the Cotswolds. According to Environment Agency data, the Little Avon presents a healthy invertebrate community that supports a good fish population with spawning grounds for Sea Trout in the lower reaches and Brown Trout and Grayling further upstream. There are also other species of conservation interest including Eels and Bullheads, several Red Data Book species and ten species listed as national priorities for conservation in the UK Biodiversity Action Plan (UKBAP) including the native white-clawed crayfish (Austropotamobius pallipes) and the water vole (Arvicola amphibious) (EA, 2012).

This multi-year project will, through conducting surveys and investigations, help to understand which stretches of the headwaters should be targeted for improvements. The focus will be on the water environment, but BART will take a holistic approach to the assessments and recommended interventions will provide multi-benefit outcomes and BART intends deliver some “quick win” enhancements in the short term.

Phase 1 will kick start this project by building a case for improvements which will benefit both people and wildlife. In early 2021 BART carried out walkover surveys to identify issues related to water quality and sediment passages, water abstraction, and physical modifications with a particular focus on fish barriers, riparian habitats and opportunities to implement Natural Flood Management (NFM) techniques to ‘slow the flow’ and create additional habitat.  A comprehensive invertebrate survey is also being conducted by BART’s aquatic ecologist.

The river walkovers identified habitat quality issues that are likely to be impacting upon the local ecology and biodiversity. These include several artificial barriers such as weirs and ponds which can fragment habitat and aquatic wildlife, lack of fencing protecting watercourses from livestock encroachment and watercourses that have become overshaded. The most extensive of the sediment issues recorded within the headwaters of the Little Avon are the road and track runoffs in numerous locations.  Areas with poaching and sediment run off entering the watercourse were also recorded.  Areas where additional tree planting could deliver benefits such increased water infiltration and reduced run off, as well as nutrient and sediment interception were also noted. This is in line with BART’s “trees for water” approach. Water abstraction in the catchment area appears to be a concern as low flows in the dry months will negatively affect the river ecology, BART is keen to investigate this further.

A series of indicative costed recommendations for work to improve habitat quality have been proposed.  These include programmes of in stream river restoration works such as strategic fencing, selected coppicing/pollarding, tree planting and further investigations into options for removal / partial removal of barriers. After engaging with landowners, interventions will be delivered following the ethos of working with natural processes – working with nature, not against it.

BART plans to raise wider interest for the project and has ambitions to extend the project scope across the entire Little Avon catchment to protect and enhance this important river and riparian corridor and create a joined up strategy to do so. We are currently seeking the support of partners to make this happen.

For more information about this project please get in touch with David Atkin: david@bristolavonriverstrust.org