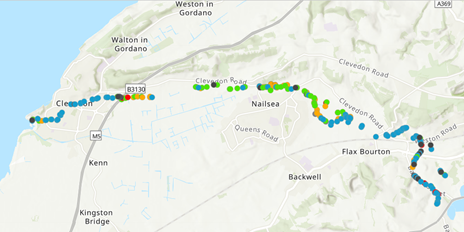 Working collaboratively with Avon Wildlife Trust, BART will deliver and promote a catchment-based approach to enhancing the natural capital of the Land Yeo river and its surrounding landscape. The Wilder Waterways project is a project being delivered in partnership with Avon Wildlife Trust (AWT) which has received funding from the Wessex Water’s Partnership Grant Scheme and a contribution from Natural England.

The river Land Yeo is a 20km river within the North Somerset Streams sub-catchment and feeds the Tickenham, Nailsea and Kenn Moor SSSI and the Severn Estuary SSSI/SAC/SPA. The Land Yeo river sits within the North Somerset Levels and Moors (NSLM), a hugely important coastal wetland habitat, including 1160ha of peatland. Crossed by a series of rivers, the area is drained by an extensive network of waterways and ditches. A key feature of this landscape is the Land Yeo, a heavily modified river that flows through North Somerset. The source of the Land Yeo is located in the Dundry Hills, where it then flows into Barrow tanks – a Bristol Water drinking water reservoir. From here, the river follows a relatively straight course skirting Flax Bourton, it then flows through Nailsea and Clevedon and ends into the Bristol Channel.

The river walkovers identified habitat quality issues within the project area which are likely to be impacting local ecology. These include artificial barriers such as weirs and culverts, re-sectioned channels – over straightened, over widened and re-enforced in places and a lack of riparian vegetation and tree cover limiting the amount of shading and refuge throughout sections of the watercourse.

The sediment pathways surveys identified sediment inputs within the project area which are likely to be causing ecological impacts.  The most extensive of the sediment issues recorded on the Land Yeo is the trampling and poaching of the riverbank in numerous locations by livestock, exacerbated by small or non-existent buffer zones.  Areas with farmyard run off entering the watercourse and muddy farm tracks causing damage to the soil adjacent to watercourses were also recorded.

BART and AWT will use the evidence derived from surveys and landowner engagement, to develop opportunities that will deliver for greater biodiversity throughout this important landscape alongside engaging community of landowners and river users through citizen science, walks, talks, and farm advice focused on water quality monitoring, habitat restoration, ongoing management and species recording.

Later this year, BART will lead a WaterBlitz for the Land Yeo & NSLM to engage local community groups which will sit alongside the main Bristol Avon Catchments WaterBlitz event. This citizen science project will be used to identify areas for further investigation of water quality issues.

For more information about this project please get in touch with Simon Hunter: simon@bristolavonriverstrust.org